I drove all the way to Wash. D.C, our Capitol City for this on MLK Day. 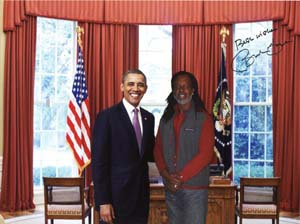 An oath to office, a commitment to do better, why were half as many people present for the second inauguration as it was for the first? What about the call to seize this moment together?

We got what we wanted and we're better prepared to celebrate and support inauguration 2013, but what happened? Did we let ourselves down? What about "a bolder leadership style"?

Well, if President Obama did such a good job and was clever enough to be reelected isn't that cause for greater celebration? Have we accepted the reality of the political divisions and know the President will prevail on his own terms?

2008 was aspirational and hopes for a change. 2013 will be more frustrating and requires a different style of leadership.

Approval or disapproval, what was our message? There are reasons to set a different tone now, to cause the opposition to feel the pressure from "us". We're being called upon to pressure his opponents to compromise, in order to get our country moving. Do you fully understand that?﻿

No more "compromising" but "(((FOLLOW ME)))". Follow me is an old infantry slogan, phrase... meaning "I am ready for battle".

Our struggle is not complete until we are treated like anyone else under the law, for if we're created equal the love we share must be equal as well.﻿