WORD FOR THE WEEK

Remember to taste your words before you spit them out. 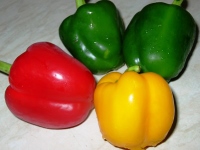 1. Any of various tropical American pepper plants of the genus Capsicum, especially any of the numerous cultivated forms of thespecies C. annuum and C. frutescens.

2. The fruit of any of these plants, especially the dried pungent types used as a condiment and in medicine.

sarcasm; plural noun: sarcasms the use of irony to mock or convey contempt."his voice, hardened by sarcasm, could not hide his resentment"synonyms:derision, mockery, ridicule, scorn, sneering, scoffing; More irony; cynicism "well, it's easy to see that she got her biting sarcasm from her mother"Origin mid 16th century: from French sarcasme, or via late Latin from late Greek sarkasmos, from Greek sarkazein ‘tear flesh,’ in late Greek ‘gnash the teeth, speak bitterly’ (from sarx, sark- ‘flesh’).

am·big·u·ous amˈbiɡyo͞oəs/adjectiveadjective: ambiguous(of language) open to more than one interpretation; having a double meaning."the question is rather ambiguous"unclear or inexact because a choice between alternatives has not been made."this whole society is morally ambiguous"synonyms:equivocal, ambivalent, open to debate/argument, arguable, debatable; Moreobscure, unclear, imprecise, vague, abstruse, doubtful, dubious, uncertain

help verb \ˈhelp; Southern often ˈhep also ˈheəp\: to do something that makes it easier for someone to do a job, to deal with a problem, etc. : to aid or assist someone.

spirit noun \ˈspir-ət\ : the force within a person that is believed to give the body life, energy, and power: the inner quality or nature of a person: a person

Crisis  noun \ˈkrī-səs\: a difficult or dangerous situation that needs serious attention;1:  the turning point for better or worse in an acute disease or fever b :  a paroxysmal attack of pain, distress, or disordered function c :  an emotionally significant event or radical change of status in a person's life <a midlife crisis> 2:  the decisive moment (as in a literary plot) 3a :  an unstable or crucial time or state of affairs in which a decisive change is impending; especially :  one with the distinct possibility of a highly undesirable outcome <a financial crisis> b :  a situation that has reached a critical phase <the environmental crisis>

facade   [fə säd′] noun The definition of a facade is the front of a building facing a public space or an artificial front or appearance by someone.

appearance   [-əns] noun Appearance is defined as the way that someone, or something, looks.

An example of a disheveled appearance is a person whose clothes are sloppy and who is said to have a disheveled look about him.

scruple   [skro̵̅o̅′pəl] noun Scruple is a feeling of doubt or hesitation based on moral grounds, or a very small amount of something.

deceit   [dē sēt′, di-] noun Deceit is defined as the act of being dishonest using a trick or telling a lie.

An example of deceit is someone lying on a dating web site.

self-actualization  [self-ak-choo-uh-luh-zey-shuh n, self-ak-] /ˈsɛlfˌæk tʃu ə ləˈzeɪ ʃən, ˌsɛlf æk-/ Spell Syllables  noun, Psychology 1. the achievement of one's full potential through creativity, independence, spontaneity, and a grasp of the real world.  2.  the process of establishing oneself as a whole person, able to develop one's abilities and to understand oneself.

tol·er·anceˈtäl(ə)rəns/nounnoun:  tolerance,   the ability or willingness to tolerate something, in particular the existence of opinions or behavior that one does not necessarily agree with;  a fair, objective, and permissive attitude toward those whose opinions, practices, race, religion, nationality, etc., differ from one's own; freedom from bigotry.

Examples:  "the tolerance of corruption, chaos and confusion."

ox·y·mo·ron  noun \ˌäk-sē-ˈmȯr-n\:  a combination of words that have opposite or very different meaning.

Thought for the Day