Being A Black Man in a White World

All you must do is ask yourself did this problem ever get resolved and that will give you the answer. But we refuse to tell the truth and a whole people is forever lost and nobody gives-a-damn.

Knowing all you know, this day and time, how can a White man pay a Black man to beat-down another Black man? This Black man believes committing such an inhumane act will give him favor in the eyes of evil people and laws, and/or help spare his life.

The identity of Black men, especially in America is so skewed it seems asinine to ask such a question.  It is surprising that supposedly highly intelligent people can make such asinine statements about Black men, so why is this?

Is being a Black man illegal everywhere or is it just in America? Remember when this was against the law? It is a known fact a conflict exist between Black America and White America. Though some semblance of progress has been made in this area, with small pockets of acceptance, it is nowhere near the treating Black men as fellow human beings. Both groups tolerate each other, as long as White men are made to feel superior.

Are Black men as inferior as Americans make them out to be? Even the best Black man in America is treated less than the worse White man, unless you consider Uncle Toms or tokens. This situation is so bad even Black men turn on Black men. Then, there are the Black people who are ashamed of being Black because of the negative stereotypes associated with Black people.  So, I think it to be very important to ask and answer this question: How does a Black man learn to be Black in America? 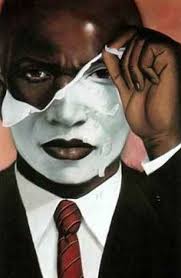 In a country where the overwhelming majority of influential positions are held by white men, Black men are educated to fit this mold. However, this process is not working and it is not because Black men are incapable of meeting the standard, but because “the mold” is constantly changing. What’s wrong or right about the mold constantly changing, it is being changed by White men and at such a pace to cause Black men to look inferior. More specifically, historically, Black men have been the victims of terrifying crimes perpetrated by White men, hence are constantly in the defensive mode.

Black men are frustrated and refusing to adjust because it is quite humiliating to keep chasing a carrot which nets you nothing. Though Black men have been chasing this carrot for so long, they’ve lost their own identity and find it impossible to return to being Black.

Who would want to return anyway? Again, it is a very asinine situation when your outward appearance is so different yet all your actions are subordinate to the White man, with whom you have conflict. A good example would be a deer being trained to act like a lion. This can only work for so long. 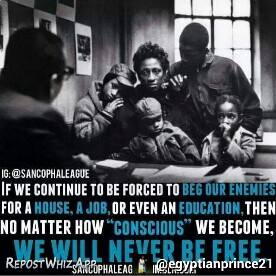 This poster should read: "We will never be Black".

Since America’s humble beginnings, Black men have been struggling with “trying” to meet the White man’s skewed definition of what they think a Black man ought to be. The skewed part of this is, White men are only going to allow Black men to be that which is going to keep Black men subordinate to White people.