Do they really, to whom and from where does racism come?

Why is this subject so popular in 2020? Are they really a priority and to those they should?

If you ask a 20 year old about MLK he won't know, other than what somebody else said, as compared to today's experience. Why would he be so enraged about what he read yesterday and today?

Is the confederacy an act of terrorism? Does the murder of innocent people, (women, children and elderly) in a Christian church by so called Christians, mean anything to Americans in America, other than a bunch of more drama? Will Black Americans be made to feel guilty for another atrocity committed against them? Do you need to read a history book to know  what went and going on? For once in the history of America, will we address our truths? Why do we continue to diminish the quality of lives for our future generations?

Healthy people and a bias to action, is this really us? Do we really use adaptive intelligence? What about our integrity, do we really possess the disciple to say no, more than we say and do nothing?

Roof allegedly told a survivor he was killing black people because “you rape our women and are taking over our country.” Thus, it is believed that Roof intended to ignite a race war in America with his actions by aggravating the Black Lives Matter movement.

Where do these racist ass people become so misinformed, misguided? Where, who keep these lies alive by teaching to people who do not know better? Why are we so inclined to follow stupidity, knowing how self-destructive? We all know, it was Black Americans who were first raped, castrated, burned, slaved... and.... We all know Black Americans ain't about to take over shit, until we get some money or our hands on a nuclear weapon to give us power,,, so why do these racist people feel so much hatred against a people who has been historically abused, denied the right to honor our heroes while being forced to respect the heroes of our oppressors? 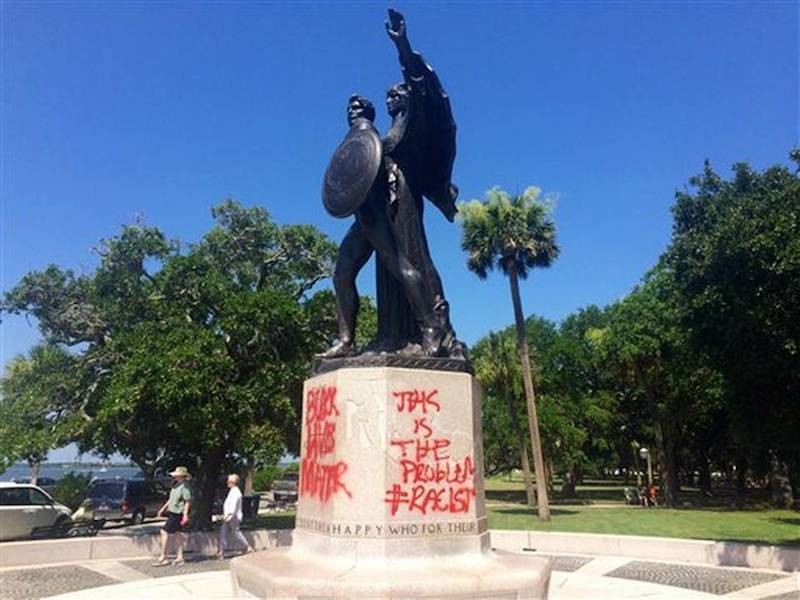 Defacing a statue or a statue defacing a people, which is more important and why don't they realize this? Doesn't this represent all that KKK bullshit? Was the confederacy in violation of HUMAN Rights? Did the confederacy commit crimes and terrorism against innocent people; not just black people but ALL people including themselves? Why such an uproar about The Truth and why cover it up?

Was the writing an act of vandalism or an act of heroism, for a much deeper problem, like the reason why the confederate statue was put there in the first place? Why are police so determined, so involved in protecting something that should matter not? Blacks pay taxes just like all other citizens, why should we be forced to admire such bullshit?

Who, what people is this statue commemorating and does it have to do with anything positive? Sudam Hussein, Osama bin Ladin had statues and what did Americans do to them, why? Are Americans guilty of the same murderous bullshit? Why are Americans, violators of all the rules, so compelled to rid the world of Black People, who are so loyal to them?

Black Lives Matter movement, why must we say this, especially during these times and being in one of the most technological advanced countries it the world? The day before, all was fine and the day after all hell broke loose. We're in for a rude awakening with all this hypocritical, double standard bullshit and it's all self-inflicted, nobody else to blame but....???? Has it taken this long to realize what has been too obvious?

Having to make a statement like this says something to the human rights progress Americans claim to have made, even though we know we didn’t.

It needed to be said. I understand this but, saying it, we've been saying things like this for so long and our racial situation only gets worse. What, who's actually behind racial unrest in America? How does a 20 year old, mentally handicapped, individual become so poisoned, outraged, as to commit such a heinous crime? From where is he getting his information and from whom?

All Lives Matter, even his.