Whose fault is that (((accountability))), but what about our children?

What's happening to our sisters? "How are Black men holding the police and each other accountable for the deaths of Black women?

In America, especially America and in today's time, someone is responsible, the question is who?

Police brutality historically has gone unchecked. First, the Black man, now Black Women and Children, so why is this, knowing what's done to one is done to all? Not only is this serious breech of human rights indicative of "our" police departments, but the entire justice system.

Where is the everybody working together as one, the Martin Luther Kings? Where are the Harriet Tubmans, Marcus Garveys, Robert Mugabes, people who are not afraid of standing up for what's right, not partially right and it has nothing to do with color?

Remember when black women sided with White men in regards to Black men being discredited as no good, lazy, uneducated, dead-beat dads? Where are the "there are no qualified Black men for professional Black women of today"... (((accountability)))? It was then, White men came between the sister and brotherhood. We were further pitted against each other and even our children were pitted against us. This is a sad situation and whose fault is it (((responsibility)))? We need to fully understand the problem in order to properly correct the situation.

My question to you is why would you side with a White man? Is it because what he has to offer you is better than what a Black man has to offer? Does his titles, labels, awards, degrees, money mean more than you do to yourself? Do they make you feel more than what you really are? Be realistic with yourself, you place so much importance on what "they" have to offer, we've lost sight of what we have to offer each other.

Black women sided with White men in order to gain his favor and receive his free assistance in turning against the Black man, but the truth is coming out now. That assistance could have been done without.

Today, 2015 it seems there is "open season" on violence and abuse against innocent Black Americans. There's just one incident after the next and nothing being done. NOw, whose fault is this?

If it were Black violence against White people then, Whites would rally together a  lynch mob and go after this Black threat. However, since this police brutality is directed against Black people, who cares about this terroristic threat? If Black Americans don't take responsibility (((accountability))) for policing and uniting themselves then who will (((respect)))? Do you think Whites are going to give you this too?

Black people join the police force but they only side with White policemen, a brotherhood stronger than their own, so what should we do? 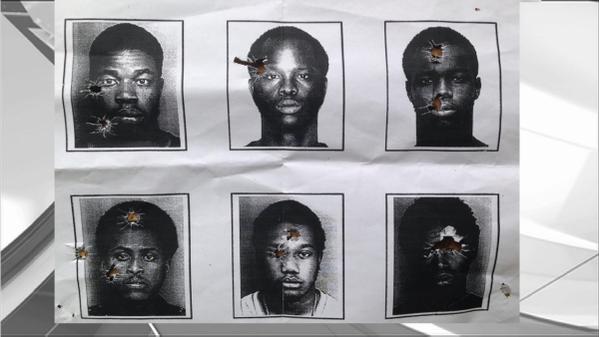 What's right with this picture? Photos of Black men used by Police in target practice

Who would punish a man for coming to the defense of another innocent man, this is natural? What man would not want help his own kind in subduing a bully-not natural? How can people come to the rescue of people and our system is so designed? Only in America would a Black man be forbidden and punished for coming to the aid of another innocent Black man. It's considered more credible and safer to have a camera.

Back to fault in the struggle against police brutality directed against Black Americans. By this time, fault has to be that of the Black Americans, for trusting their unworthy White counterparts to uphold unconstitutional laws.

Can Black Americans defend themselves against police brutality being separated? This accountability has nothing to do with the Black man, but all to do with Black people. If your man treated you wrong, what would do?