The world-famous physicist, of the U.K., dies at age 76. He sought to prove the "multiverse" theory. His final work was titled "A Smooth Exit From Eternal Inflation", where he predicted our universe would eventually fade to darkness as the stars run out of energy, at least this is what we want to believe he meant.

I glimpsed into his work revealed Science and Imagination, to prove what can be imagined can be proven. This does not mean it is true, but a "justification" for achieving a better understanding of our own universe.

The earth would turn into a ball of fire by 2600, therefore humans should prepare by seeking out an alternate planet on which to live, if we want to continue existing... but again where I connected was with his message of HOPE for people suffering from depression. He drew a comparison between black holes in space or on planets and depression, with the message of hope to anyone considering themselves suffering and that was: Don't give up, there is a way out. No matter how difficult life may seem don't be angry because you can lose all hope if you can’t laugh at yourself and life in general...

It is amazing how a guy, living with "ALS", or Lou Gehrig's disease, wheelchair bound from, I guess age 21, could have such a profound effect upon the world and think about it, most never heard of him. 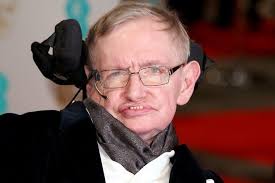 the world of many worlds