The glue binding us all together does it start with marriage?

YOu often hear all the accolades about being a great family, but where is the evidence? What family is really the shining example of what a family is supposed to be?

Sometimes you can want something soo bad you imagine it to be true. You hear about his cohesion between family members but have yet to experience it? We boast of being such great Christian family members but no evidence in our day to day interactions, but just the opposite?

In this case, I going to refer to your spouse or significant other as your "fucking buddy" because that is the only glue I see holding together what we referred to as family. My point being if your little fuck buddy was more or you'll was what you claimed to be, the world would be a much better place to live today.

Our church, government and society upheld tradition marriage until they could not uphold it any more. Translation: They upheld all those lies until they had to come out of the closet. This closet was the storage room for all kind of evils - infidelity, betrayal, holy matrimony, racially charged, domestic violence and abuse. It ain't even just for a man and a woman.

Today's marriages have caused so much hurt and pain, I advocate for Single people. Married people have not a clue to what they're supposed to be doing and if they did then, so many people would not want to stray from traditional marriage. Making marriages legal was another stumbling block placed between your start point and destination, what you envisioned and your goal. More stress and aggravation.

Most get married out of peer pressure. The love we describe is an illusion of what we wanted others would want to see - equal. We worked so hard at supporting this false image, we totally destroyed what a real marriage is all about. 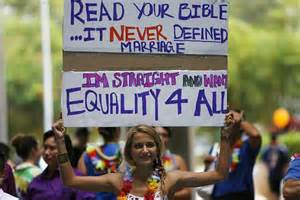 Today's marriages are so lavish and phony, it ain't even funny and is part the reason why marriages extend so far past the established boundaries of tradition. We've promoted traditional marriages as the best cohesive bond between a man and woman and to minimize the number of bastard children born into our world, who ever would have thought that would have developed into this? The glue has been compromised and reveals the marriages of yesterday were marriages of betrayal, conflict, confusion and are not the marriages we wanted, needed nor claimed to have.

If traditional marriage is the first step in building a solid family unit and if the family unit is the foundation for a stronger everything else, we've failed miserably. Our confidence level has been has been severely shattered, loss of dignity and respect; by the constant fear of never having enough. And we make it that way.

Now, that we have the exact opposite of what we wanted, what are we going to do? What's happening today is a good indicator or yesterdays marriages gone bad. How can you be a good family when you had it all wrong?

There's a new type of cohesion developing within families and relationships of today. It is a cohesion those of us from yesterday find hard to understand and accept. That the harsh reality of taking so long to face our truths.

Love is love, love who you want, marry who you love. That's the way it should have been.