What going on with MacDonald's? Everybody has a bad day but this takes the cake...

The shift manager from hell! This could only happen to Art!

On a sunshiny day, not a cloud in the sky, really I could not believe I was engaged in a very violent verbal altercation with a Shift Manager from MacDonald's.

To get right down to it, Me and that bitch was about to "get it on" and there was no attempt to control her self, on her part.

She was about as nasty, rude and ghetto of a bitch I've ever seen and to be a shift manager for MacDonald's. How could someone with so much experience and expertise allow an order of Chicken Biscuits to escalate to one or both of us being involved in a physical altercation?

At the drive thru window I ordered and paid for two chicken biscuits. At the pick up window they gave me two egg biscuits and I'm just glad I caught it before pulling off.

I brought it to the attention of the server and they were just confused. To minimize confusion and expedite my order, I told the server I would take the egg biscuit I had in my hands and refund me the difference.

Oh no she said while listening and being coached by someone else, your order is coming... At that point, I'd had enough and asked for my money back. Then comes the bitch from west hell, telling me how I was holding up the line and she wouldn't refund my money until I pulled up.

Well, this took the cake for me and I reacted with, "me holding up the line"! and we went at it, to the point of her threatening to come out and whip my ass. Oh yea, by now this exchange had escalated into an all out "street brawl". On lookers were seriously alarmed, wondering what was about to happen. Her attitude was "she owned the fucking store therefore did not have to answer to anybody". Her attitude displayed, "she flunked MacDonald's customer service class".

To keep me from going to jail for hitting "a white woman" I pulled up and waited. In a minute of two the bitch came out like she was ready for a fight and told me, "before I refund your money...know you are banded from this store".

Now we were "making a scene in front of the store". I cut it all short, asked for my money again and as I was driving off, she yelled out, "you mother fucker". That's how I got this letter of apology from MaC attack. Inc who says they represent MacDonalds. 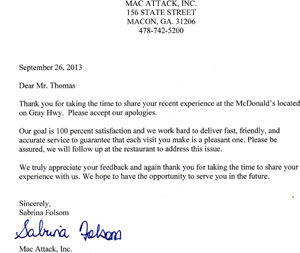 The Art of Sharing