The nigger part anyway! But what will canceling accomplish? How does this reflect on established networks? White crime and the first to act like they don't do shit, while controlling the masses. All these years and the racist monster finally reveals himself.

Telling lies when the truth is clear, do you dispute this, is it your generation, you dispute everything else or is this sweeping another little innocent blunder under the rug???...It ain't the racist shit, that's just a word, it's your hypocritical and cruel nature. Now, you gon discredit, call me mad, but quite to the contrary.

I really don't think people like Paula Deen are racist but stupid as hell. They're ego tripping and too stupid to be racist. "Racist" is too good of a word to be used to describe them?

When do you take your work, your word serious? And what's with mass media and their commitment to hire the best people? I mean everyday you're telling us what's good and showing us how bad we are, where do you take responsibility in all of this?

I mean every program is screened, now who screened or failed to screen this shit? Do you support and cover for these kind of incompetent people? Are you harboring racists type criminals?

How many good people suffered? How can you tell me how to get a job? What kind of CEO are you? These are mother fuckers professing and being promoted  by a system, set to serve me.

I mean the damn system is supposed to work and we should  not have hired unethical motherfuckers. They're fucking stupid and even the worst mentally insane person could perform better. That is what's sad about our fucking system, it allows, supports, upholds stupid ass people who pretend to be self-righteous and worse than that, you deny straight forward honest people like me. NOw, what kind of fucking system is that,,, you're right, but I'm wrong, every fucking day???

White on White crime on the rise. White 2013 racists coming out... What are Black Folk suppose to do??? …. Wanda, Vicki and Paula Dean, do women stick together? Can they and why not?

How do women gain respect, without respecting themselves and each other? Wanda is a very in touch person, in comparison to Vicki who is a very out of touch person, but they made a very good friends, for a first meeting. The glue appeared to be the notion of Wanda having Jennifer’s back.

They both were in their fifties, astute and sexy as hell, but Vicki’s attitude towards people made her come across as a know it all. Wearing her sexy jeans, she often used terms like “what the fuck, oh well, fuck you…” with the attitude that “I got it going on”. This very obnoxious behavior went on until a younger crown came in, who was more obnoxious than Vicki, but at the same time they were as astute.

That group was in their thirties and a particular character stood out and I will refer to her as Jennifer. Instead tight jeans, Jennifer was wearing some sexy ass “daisy dukes” with the pockets hanging out, coupled with a body to match.

Though both of these ladies were sexy, there was a great age difference and the thing about that all is Vicki alienated herself by trying to out shine Jennifer, who was drunk as hell. This whole saga came to a head when Jennifer staggered out of control into big mouth Vicki, who cringed at the thought of a pretty, sexy and drunk as hell Jennifer losing her balance and stumbling towards Vicki. Vicki then referred to Jennifer by saying, “get this bitch off me”.

Now, it looks like Vicki who was the older and supposedly the more mature would have had better sense than to call a drunken lady a bitch, especially while she’s surrounded by her friends. During this exchange Vicki also publicly described the younger group as being on drugs or so. Well, do you think you would get away with that, no matter how obnoxious Jennifer was? There was a moment of silence and then one of Jennifer’s friends approached Vicki and asked her not to refer to their friend in such a manner. They said we know she drunk and obnoxious, but she’s not trying to fight you, therefore she’s not deserving of being publicly referred to as a bitch.

Talking about young folk being wiser, acting more mature, leadership, making peace, while Vicki stood scared as hell behind Wanda. I beg you, my children, my team, my fans, my partners, I beg for your forgiveness.  Inappropriate, hurtful language is totally, totally unacceptable.

Come on lady, you’re just realizing that these words, including the “n” word used in the wrong way could result in your ass getting whipped. Paula Deen was a racist crime and Vicki and Jennifer was white on white crime.

Now, here goes… You talk about respect, working hard so you can get what all these rich white racist mother fuckers have… Now, I will not get a chance to say this often, But People like Paula Deen are as stupid as hell. Paula Deen and people like her, especially women, are a disgrace to everything good and wholesome. You’re like a trap door holding us all back while your holier than thou ass sucks up everything.

So, when you want to know where the people who are too dumb to be racist reside and how they work to mask their stupid asses watch mass media. And they’re the first to put down a Black, an African-American. There’s a way to say or make any racial slur, but it’s all about how it is done. Was there malicious intent, were you even talking about something worth a shit? Were you trying to help or hurt? And think you’ve been selling your phony as bullshit to everyone. 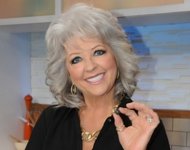 Did she really mean what they say she said and what will she do to prove otherwise? We hunted down and killed Sudam, Osama, Martin Luther King, Jr and others believed to be terrorists... What will we do about the likes of this one? Unhappy people what do they do?

Do your kids really appreciate you?

Nigger food network vents Is it okay to refer to them as niggers?

Nigger President Barack Obama and all them other niggas in the White HOuse, this is what Paula Deen's Food Network thinks of you... Well, they are niggas …