Instead of punishing the guilty, what are we doing? 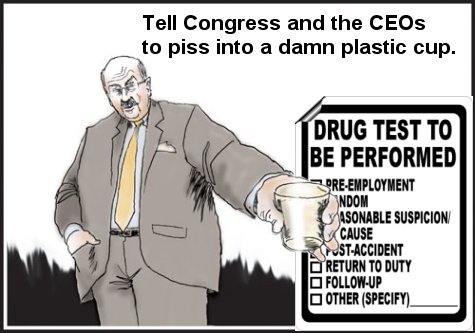 To what is America, one of the richest countries in the world, coming? Is wealth a sin or a blessing, then why aren’t the wealthy so eager to share? Where is all this wealth and for what is it being used? Was it derived from sheer luck or was it derived by thieves, murderers and slaves? Must politicians pee for their retirement?

Now, to hell with all that and self-righteous Americans feel justified to take action against its poor people, those who qualify for meager rations to help them along this cruel journey we’ve created. And it is all over allegations of some food stamp recipients selling food stamps for drugs, and for this notion, the government has been persuaded to implement a scheme to stop it. Just how are people in poverty suppose to cope, while the rich is out exploiting their huge houses, overpriced fancy junk, legal drug rings, cronyism and corruption? Who's going to get paid for pissing all these folk and who will dictate what they can do with this money?

The over-whelming majority of Americans have mixed thoughts about pissing for food stamps because it has been instilled in them that doing drugs is one of the most evil things a person can do and to use government money, even though we know otherwise. But because this recipient may be trading food stamps for drugs, we're going to add yet another burden, to a person already overwhelmed with problems, to force them into submission, further harassing, instead of punishing the guilty.

Government money is rightfully money of, for and put there by the people to help every American in need. When are we going to help someone without looking for a profit in return? When are we going to provide assistance without dictating how they use it? For the man who invested his family savings in something irrelevant to the good of the whole, why don’t we add more stipulations for investors? Would you reframe from extinguishing a house fire because its inhabitants are known racists? Would you piss every youth because youth are prone to be irresponsible? Would you piss church goers for going to church for their sins? What about immigrant workers?

I don’t condone any person for the abuse of anything and therefore; I do not condone one person failing to help another because that person is believed to be trading food stamps for drugs, why not bust the drug dealer?

The truth about urinalysis, why piss innocent people?

If there were no sellers there would be no buyers. Of all the drugs marketed in America, legal and illegal, which ones are not abused? Americans abuse everything, people, land and resources, so why are self-righteous Americans coming down so hard on people who qualify for Food Stamps?

This generation will not be the last, people do change, people need people, especially when you are old and forgotten. Especially when you still think everybody should be heterosexual while the rest of the world prefers bisexual and/or homosexual.

Which people is more delusional, the drug addict or transgender, the politician or preacher, the Judge or the jury, the wedded mom or the unwed mom, the racists or the freedom fighter? Is the wealth of this world set aside just for "the just"?

We’re all trying the best we can to survive and to defend this country. We need people, not just for our own selfish reasons, but to be strong, so why further humiliate a man who’s down? Show peace rather than piss.

more on pissing for food stamps