How often do you get to personally interact with another human being blessed with the gift of "bringing to reality, what only the mind can see"? Seeing the work of John Daso, some words which come to mind are, Visionary, Master of the Art, Brilliant, Natural..."the most breathtakingly beautiful and personal artwork you will ever have the pleasure of experiencing"!

Meeting John, someone you can't help but admire... some words would be: Humble, Humorist, Humanitarian, Charismatic, very Passionate Artist...! 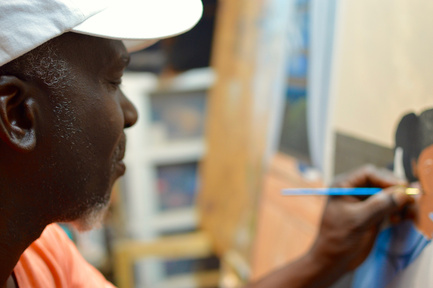 A Self-taught artist and visionary John Daso was born and raised in Augusta, Georgia. Daso was only four-years old when he began this artistic journey, creating not the expected stick figure drawing of a man, but a detailed rendition. Much of Daso’s past work focused on his childhood, growing up as a young black man in the segregated South. While a student at Lucy Laney High School, Geneva Stallings saw Daso’s talent and encouraged him to hone his skills and follow his dreams. Since that first drawing back in 1960, which Daso drew on a brown paper bag because he lacked proper paper, he knew he would grow up to be an artist.

One of his most recognizable works is a self portrait sitting on the front steps of his family home with his Grandmother standing on the porch, seemingly fussing at him. In reality, Daso said she was motivating him, “She was telling me that God gave me my talent and all I had to do was use it".

Painting for the past fifty plus years, Daso’s work has earned him national and international recognition, not only as a renowned artist, but a respected and business savvy entrepreneur. Since becoming a professional artist in 1974, Daso’s work has been shown at galleries across the United States. His “I Remember When” Collection graced the Plaza Hotel “Daso in Manhattan 2009.” In 2004 he showed at the Columbia, SC Museum of Art. He returned to his roots when The Daso Art Collection was exhibited at the Augusta, GA Lucy Craft Laney Museum of Black History. His artwork graced the 2001 NAACP Convention held in New Orleans, LA. Drawn to Charleston, SC, in the late 1990’s Daso was the first African-American to own a gallery in the historic downtown French Quarter. “My gallery became so popular, especially during the French Quarter Art Walks, we would have people spilling out into the streets dancing and having a wonderful time! In fact, several tour groups began including the gallery on their tours,” Daso said. Along with creating art, Daso has felt a calling to help young artists of today succeed.

Portraying truth through realism, Daso's work inspires the casual observer to become more cognizant of the importance of relationship building and bridging gaps. His ability to so eloquently, convey the past, capture the present and predict the future, with brush, paint and canvas has earned him the utmost respect and his work to be "a must have" for any art collector.

Dreams for the future are as vital to Daso as what his eyes see and his hands create. He said, “People call them dreams but I believe they are really glimpses of the future. Dreams are in your hands; make with them what you want, and know they never die until you stop believing. While other people call them dreams I believe they are really glimpses of what your future can be.” A deeply religious man, Daso is quick to give God all the glory and credit for what he has achieved. From creating art to his deep abiding desire to helping others realize their passion. Daso lives each day balancing the perfect trifecta of faith, ambition and drive.

To complete this article, some information was taken from the article John Daso, Living Life by Faith, Ambition and Drive by Lee Ann Carter Sponsor My Event