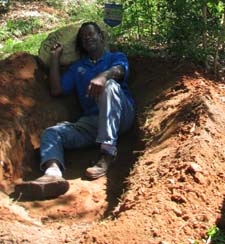 Do women deserve the respect they demand?

My Gift to you today is about Woman, our women and treatment of them.

It is a very humbling, sensitive, very important subject we do not address very well. Not because i am egotistical, hate women or something of this nature, I love women just as well as the best man.....but because the truth needs to be told.

The weakness of man is woman.

Everyone has a mamma, sister, wife....You know men get the blame for a lot of criminal shit, damn near everything which goes wrong, there happens to be a man at the wheel.

Women, our little darlings, gifts to the rest of the world, keeper of all our little secrets and use as the standard for being politically correct, advantage and disadvantage???

Will women tolerate atrocities like removal of Native Americans, slave trading, if they do then you already know. But it goes further than that because the best men have a problem in addressing women created bullshit, with their punk asses. Our women and men used to have well defined roles but... the people before us had well defined roles but... Now we claim to be the administrators of gender related issues, but we're so full of self, it is ashame.

Looking at women drivers, is one very good indication of wtf is going on with women. Road rage, the most aggressive road rage I’ve ever experienced was an innocent driving encounter I had with a very well to do looking white woman, damn. I don’t know if she had a weapon or what but I cannot believe she thought she was going to allow her to “kick my ass”.

Buying a burger at McDonald's, the most violent encounter ensued between me and a nasty ass female employee. I could not believe the bitch became so enraged over a fucking hamburger.

Phone, dialing the wrong number, again the most aggressive encounters occurred with women on the other end.

Riding my bike, women acted as if they really wanted to run over me. Gong to local festivals, it was a nasty ass white woman who started what turned out to be a very aggressive exchange of terroristic threats.

Are women as clean and organized as we would like for you to believe? Some of the most vile toilets I've ever cleaned were those dedicated to the use of women. The funkiest homes I have ever visited belonged to single moms and well to do women.

The greatest perpetrators of racism, again women and they remain loyal to their cause. Being kicked off dating sites because of the perception of what is said to women, no matter how nicely they provoked it. this is how women run shit. Not the best example but some of you know what I mean, all designed to protect women.

Attractive, well to do Women first, women treated with dignity and respect, open doors, pick up shit they dropped… but what do they ever do for men besize complain about what is not happening?

Having babies is a very important contribution, but do they look like who they are supposed be? Do we treat the all with the same dignity and respect, do we even know it? Why do we "use" them for a clever excuse for being excused from a lot of other evil shit which cannot happen without a man? Why did the settlers of this country treat women as second class citizens? Are men that insecure, stupid or do they know the real deal? What happened to all that we don’t abuse women bullshit, but come to their rescue?

Women have the unique ability to drawing blood without ever firing a shot, pulling a knife, throwing a punch. They know how to hide their real selves behind socially accepted bulllshit like religion, shopping, touring, charity...always innocent, the victim...but they have their dirty little claws embedded in everything vile, believe themselves to be the deciding factor, good or bad. They tolerate, participate in every instant of violence and abuse the world over and are still able to come out smelling like a rose.

Women rally together for selfish political concerns, when did they ever rally together to stop wars, atrocities, racism; but there is plenty of evidence they were active participants in these great evils. They even want to join the armed forces, be hired for jobs traditionally for men???  I see women doing everything to benefit themselves and to hell with all others.

Because of our false perception of women, women are the absolutely most dangerous being the world over and they know their power and it rest right snugly between their legs. Probably, the most sought after body part the world over. It is amazing how women can so cleverly dress what they do not want you to see and the ridiculous amount of time spent complimenting it???

Now, the thing between women and women is changing the weakness of men. Well, if women were really making things better, then things would be better, but again. Sad how Trump beat out Hillary and the expectations of the country never saw it coming. Women know women, know how to put other women in their places, which is very threatening to the good of any other people, person, family and that is how Trump beat Hillary, trying to be too nice when the real Hillary needed to come out.

Because your family does not operate the same as they expect, they feel obliged to prove to the world you are wrong. You don't want to marry, be a good father, husband, brother because you're not catering to their asses. Our society is guilty in using women to sell whatever it is that won't sell. As gross as it sounds, is cutting out their clits really a form of mutilation, then why has it survived so long? Is this why they can so easily dictate the castration of men? They blame the men, but it is actually women who best cut women.

No matter how good you treat a woman, it is never enough, ask slaveowners and slaves, the bitches can never be grateful for what is? You must do some special shit when they come around and guys oblige. They use violence and abuse to toot their own horns and when it is all over, they prance around smelling of some sweet ass perfume like nothing ever happen. Oh, it's going to be alright and we're coming to your rescue? but when you look at charitable organizations run by women they are the absolute most vile things that could ever happen to a human being. All they want is to cause you to believe they are the very best thing to ever happen to you and we want to believe it. We need each other, act like it!

James Brown, in his song Man's World, was very misleading, guess he was just trying to get some more pussy, can you imagine such a song coming from a man known for violence and abuse against women and cars, lol. Sounds good but...

Know I love you and just want you to know, it hurts.

Being Polictically correct and socially accepted